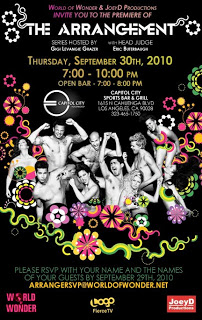 Vision-Film & Television
Production’s Omer Bar Sadeh and Head Writer Michael Seligman showed up to
Capitol City Sports Bar and Grill September
30th for the premiere of Logo Network’s
newest reality TV show, The Arrangement.Omer came out to support Vision’s industry
peers Joe Del Hierro, and David Stanley, two
executive producers for the show. The
Arrangement follows a group of twelve
floral designers competing for the winning
title. Stanley, a native to the flowerdecorating industry came up with the
concept for Logo.

Omer watched the premiere
episode with the likes of top Hollywood
celebrities, producers, and managers,
wherein the contestants had to make a
floral arrangement around nude sushi
models. Overall, “it was a great night to
come out and support some of my friends in
the industry and be a part of a new hit
show,” says Omer.

A MI ME GUSTA!