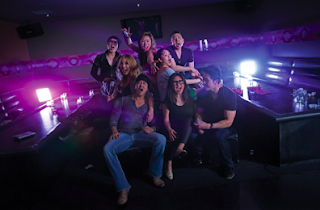 It’s true. I worked on this show over the summer. I even had to give up my Rosh Hashana celebration as we were filming deep into the night that day. But it was worth EVERY moment.

K-Town is a reality show based in Korea Town, Los Angeles, CA, and it captures moments in the lives of eight extra ordinary people. The eight friends live in Korea Town, which the show describes as an fascinating, fun and delicious place – for the first time.

The group includes seven Koreans, and one Chinese. Some of them are extremely successful, some of them less and are struggling with work and money. But they all have big personalities and (very!) unique opinions. About life as well, but mostly about their friends.

During the second season, the group is dealing mostly with planning Young and So-Young’s wedding, and the challenges they go through along the way. Friendships, trust, love and hook-ups are only a few of the drama moments, aside of clubbing, sex, a lot of alcohol and fighting.

One of the best things about the show, is the testimonials of the group members: Not only they introduce and explain different terms and traditions in the Korean culture – they also talk and criticize each other. And that is hilarious.

K-Town was produced by production company Electus, and directed by the talented Mike Le, Eugine Choi and Eddie Kim, and executive produced by with Tyrese Gibson Electus’ Ben Silverman and Evan Bregman. All contributed to the success of the show and its’ amazing look.No wonder it became a sensation!

Take a look and join hundreds of thousands who became huge fans of the show. I love it, and can’t wait for the third season!

Check it out here:

Create A Business Video That Makes You Money – All By Yourself!