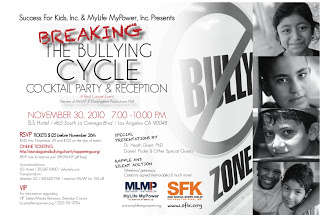 Jacob Omer BarSadeh for Vision Film and Television Production went to support My-Life-My-Power and Success-For-Kids fundraising event on November 30, 2010. The event took place at the high-end SLS Hotel in Los Angeles.
Hosted by Marla Maples, And Daniel Puder the event attracted supporters such as David Arquette, Jeremy Piven, and many other television show hosts, actors, singers, producers and writers from the Hollywood industry.
Daniel Puder, the American professional mixed martial artist, founded My-Life-My-Power about 2 months ago, to empower youngsters and help them build their self-esteem. Puder, who was bullied as a child, founded the non-profit after several suicides were committed in a period of 3 weeks.

Success-For-Kids, a non-profit organization that helps children around the world make better decisions, has partnered with My-Life-My-Power, and together they will be able to create a major change: from educating the bullies to empowering the bullied to increasing national consciousness to break the bullying cycle.

Vision supports SFK by donating time and money to its growth and success. In addition to helping with the organization’s videos, Vision is currently producing the documentary film “Racing Awareness” that tells the stories of 4 children around the world before studying SFK, and throughout one year of studying the program.

The event was wonderful, and items such as autographed Beatles albums, Madonna signed CDs and more were offered to bid on.
For more info and pictures visit: www.SFK.org and www,MyLifeMyPower.org